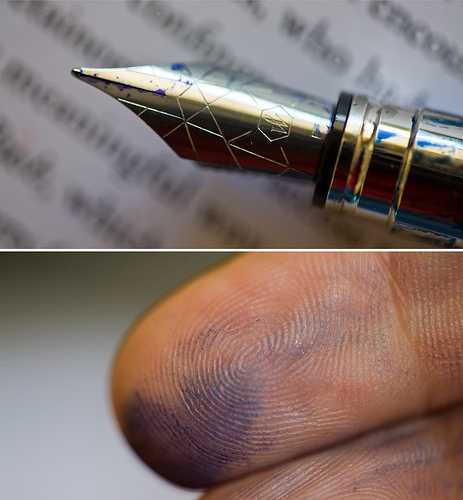 I can not rest until we flow as one,

To meet whatever future Fate contrives.

Our poem shall pour forth from sun to sun

As, pen in hand, we two write out our lives.


This is said to be part of a long-lost sonnet by the Bard; which was a recent discovery, and it was hand written with a fountain pen, giving rise to speculation among pen scholars that the fountain pen was indeed invented 300 years earlier than believed.

From scholars to the common man, everyone used the quintessential ink pen all those years ago. They had to, they had no choice.

But today, when I need to scribble something, I pick up the gel pen. A friend of mine asked me recently why I don’t use an ink pen.  This question took me back to when I was young and reminded me of the red ink nib pen my grandfather gifted me. It would be my lucky pen for many years to come. In school too, we were always told that using an ink pen improves handwriting.

However, with the passage of time, that pen was left behind as part of other memorabilia, giving way to the more modern pens. The transition from an ink pen to a gel pen was painless, as it was the norm and ink pens slowly faded away from the main stream. At work, hardly anyone uses an ink pen these days.  You won’t find ink pens being advertised too, all the advertising budget is dedicated to the latest in gel pens with fancy names.

No longer do pens hold the same value as they did before.  A pen lasts only as long as its ink lasts, after which it is dumped and replaced with a new “gel” pen.

Can’t help but feel that this generation is missing out on the thrill of having ink on their fingers, and also the pleasure of knowing that a pen can bring them good luck.  A pen no longer holds the sentimental value that it did and today’s kids may even find it surprising that we keep those old pens as memories.

Images of people filling ink into the pen with a bottle keep flashing in front of me and I miss it.  Makes me wonder if the disposable times we live in are a curse.

Though the ink pen is slowly fading away, the beauty of words etched with ink stand out from all others.  Although, ink pens are not used much for regular writing, they are still used for manga inking as well as for calligraphy; especially the dip pens.

In spite of feeling the loss and missing the good old days, if you ask me to go back to using ink pens, I may not be able to do so. The fountain pens, ballpoint pens, roller ball pens have taken over.

The ultimate arbiter is convenience and somehow I console myself thinking that if Shakespeare were alive today, he himself would be using a gel pen.