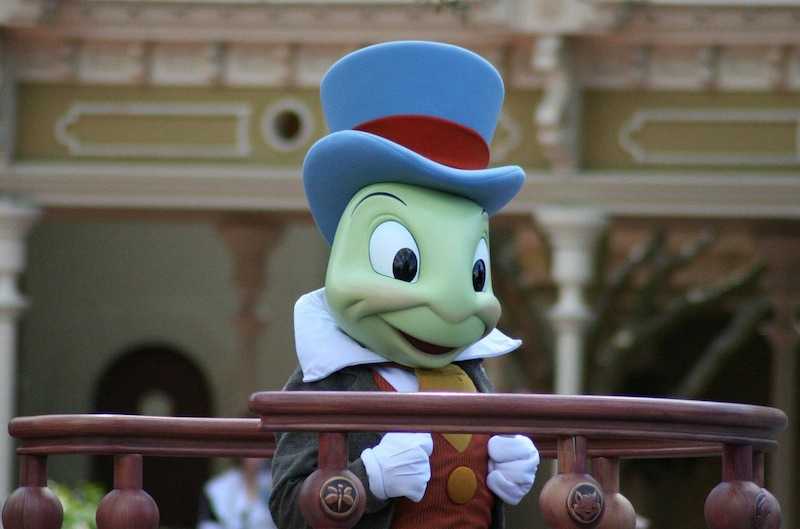 It’s a name everyone’s heard of.  Just like Coca Cola, Nike and Apple. No matter whether you’re a die-hard fan of what they do or not, you’ll have heard of the name Disney.

Formed as a company in October 1923, headed up by the famous Walt Disney and known primarily for their iconic Mickey Mouse character, Disney has expanded in various directions over the last few decades. But they’ve always had the aim of providing an experience that satisfies children like no other company has been able to replicate.  Truly understanding what children want, they are able to ignite their imaginations and take them to a land far, far away or another universe years into the future.

As ‘perfect’ as a company as Disney may appear to be, behind the scenes things often aren’t as idyllic or at the very least, aren’t as they first seem – and here I want to give you a bit of an insight into some of the strangest and most unusual things you’re unlikely to know about Disney. 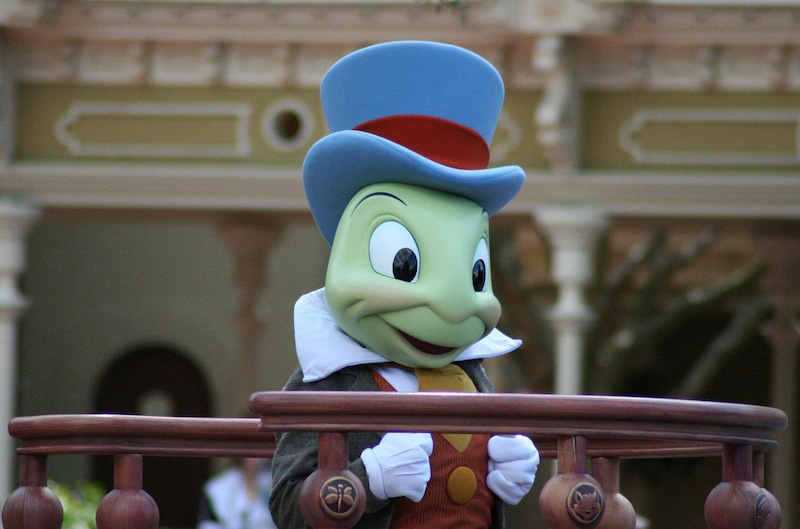 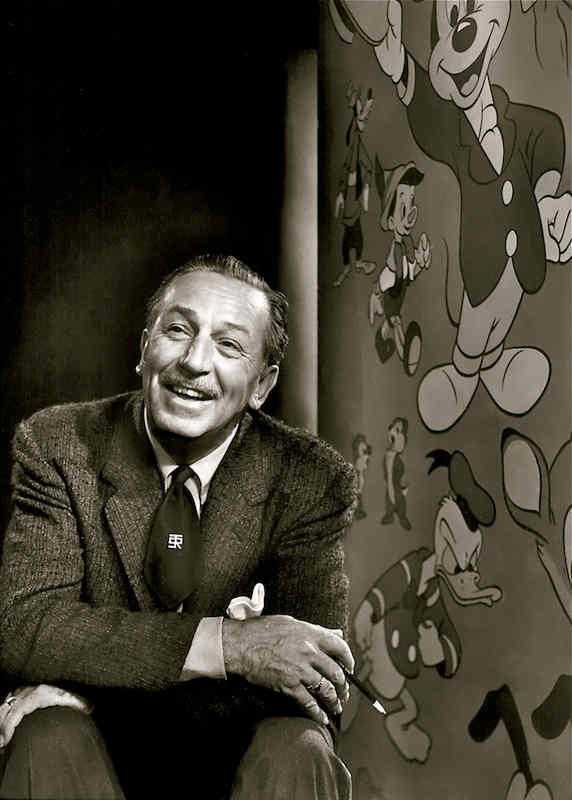 Working for any of the Disney-themed resorts is often seen as a fantastic opportunity, as you get the chance to be what they call a ‘cast member’. Seen as part of the ‘show’ (or experience), you can make children and adults’ time at Disney all that more magical by doing everything from bringing some of the characters to life through to simply offering friendly advice whenever it’s needed.

But as fantastic as it can seem to the general public, working for Disney brings with it a huge number of rules and regulations around a variety of different things, with one of the most notable being personal grooming.

Although things have become a little more relaxed in recent years as culture changes have taken place, for decades Disney employees in the resorts and theme parks weren’t allowed to sport a beard and they had to adhere to strict rules for their appearance. Employees today are allowed some neatly trimmed facial hair, but you’re still not going to walk into a Disney theme park and see someone looking like Santa Claus working there – and this all stems from Walt Disney’s belief that employees should appear to be as perfect as the characters he was creating. (Strangely, this meant Walt Disney himself wouldn’t have been eligible to work in a customer-facing role!). 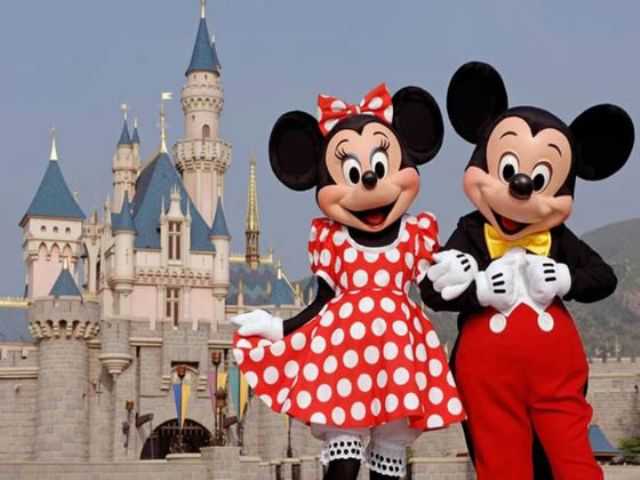 Working with your partner is either something that is going to work perfectly or end in disaster.  More often than not, the latter happens and it’s for this reason why the majority of us tend to keep our work lives separate from our home lives.

But at Disney, there isn’t a choice – if you work for the company, the rules state you can’t date another employee.

Not something that was that widely known (although ‘Don’t Date Disney’ is a phrase more than a handful of people have heard of), it all came out in the press a few years ago when a picture of ‘Captain Jack Sparrow’ kissing ‘Ariel’ from the Little Mermaid appeared online, leading to the former being reprimanded.

3.  They have some particularly mischievous artists 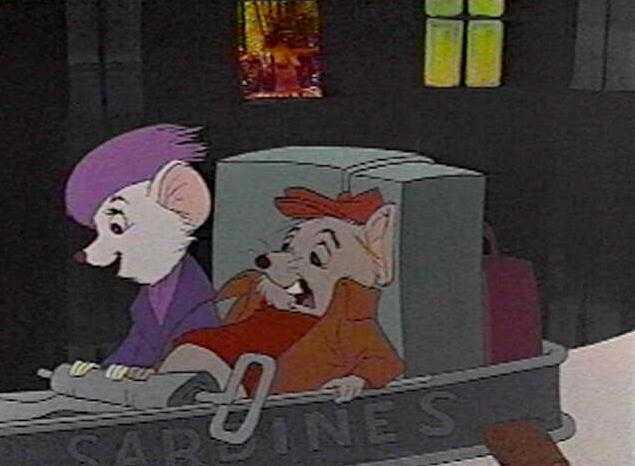 When you think of Disney, you think of films that are perfect for children, right?  Movies that have been developed throughout the last few decades that don’t take into account the needs of adults, but are created to whisk children away to other worlds where everything is perfect, the bad guys get their comeuppance and everyone lives happily ever after.

And generally speaking, that’s exactly what Disney produces – but on more than one occasion a few images, some more than a little risqué, have been included in the finished product.

A prime example is in the 1977 film ‘The Rescuers’, as in one scene you can clearly see a topless woman on a poster in the background.  Not really something you want your children to be seeing, is it?

Another instance of someone’s handiwork can be seen in the scene where Jessica Rabbit gets thrown from a car in 1988’s ‘Who Framed Roger Rabbit?’.  With her dress opening up, it reveals what appears to be her naked crotch.  Although some have suggested it could simply be her underwear, the fact is that if this has to be suggested, it must be questioned if it was done so intentionally – why not just draw her wearing what would clearly and obviously be underwear?

4.  You can get a replacement DVD (almost) for free 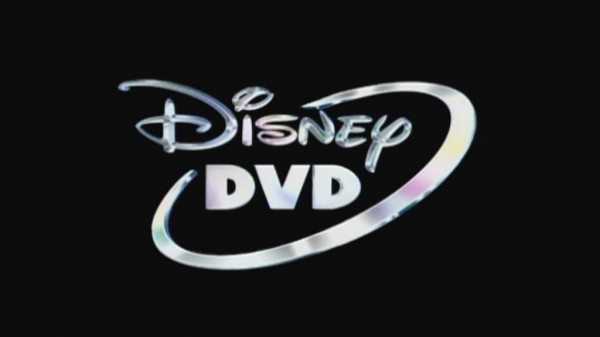 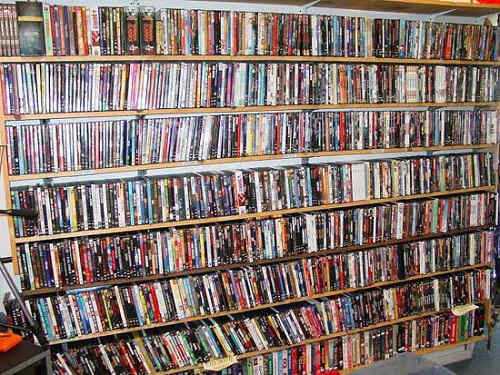 Simply put, if you break or damage a Disney DVD or Blu-Ray disc, if you get in touch with Disney and send them a couple of dollars, you’ll get a brand new disc sent straight to you in the post.

Apparently a lot of movie companies do this, but everyone I’ve mentioned this to didn’t have a clue about it.  I know DVDs and Blu-Rays aren’t as susceptible to damage as VHSs were, but I’m sure we’ve all scratched a few discs that has made them skip at certain points throughout the film, ultimately resulting in a poor viewing experience – it’s not what you want and by this fact, it’s not what Disney want either!

5.  The Magic Kingdom is elevated for a reason 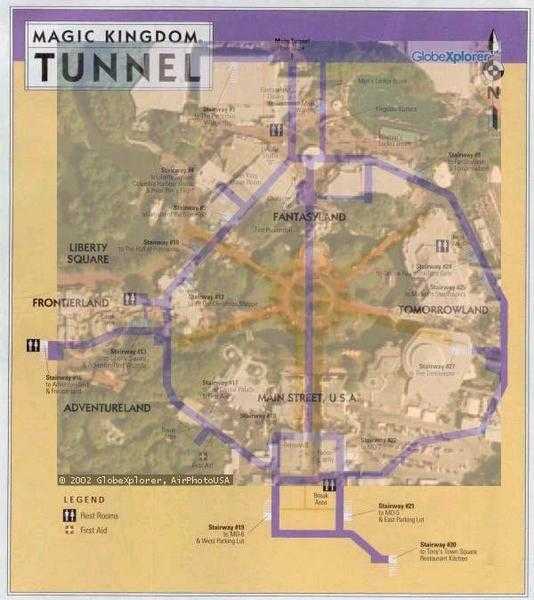 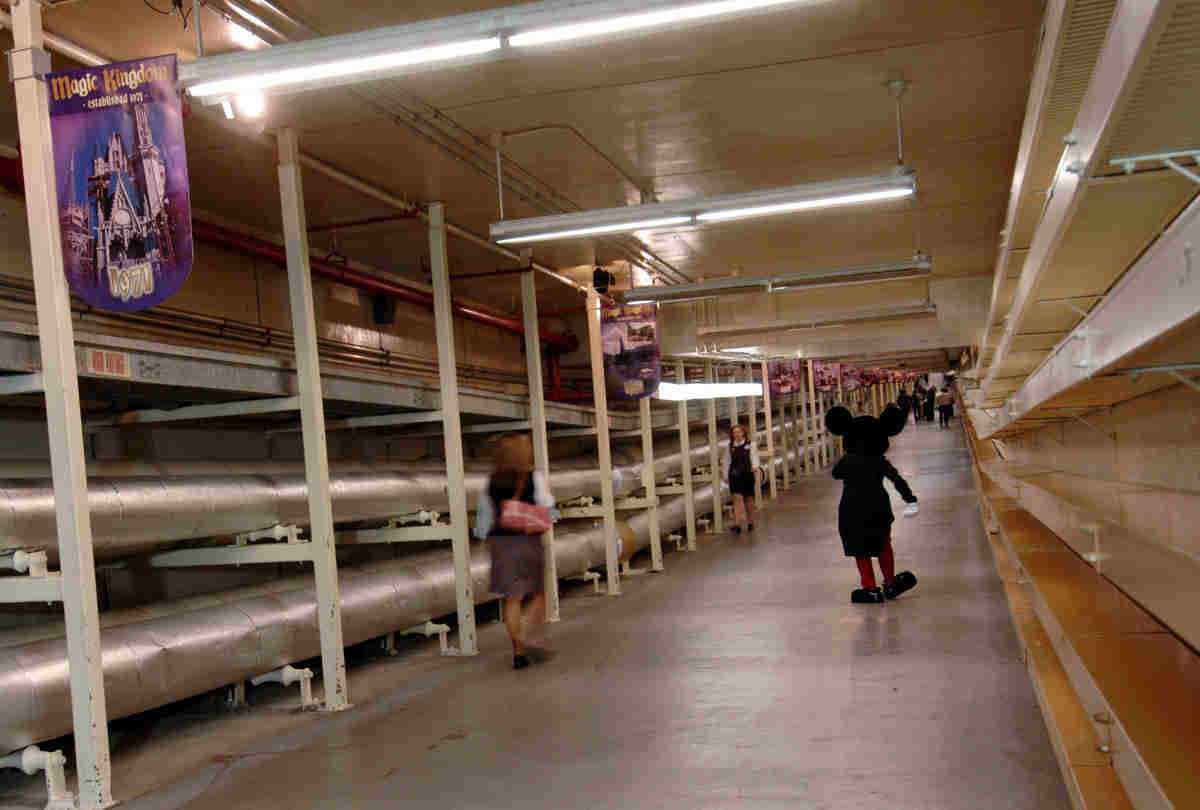 This is probably my favourite fact on this list, as it shows Walt Disney’s aim to produce something that is perfect for children and families to experience, transporting them to a different world that is as real as it can be.

When Magic Kingdom was being created, Walt Disney wanted cast members – staff – to be able to get around the park without being seen by guests when it wasn’t necessary.  The story goes that he saw a cowboy walking through the futuristic Tomorrowland in Disneyland, felt it spoiled the experience and didn’t want this to happen in the future.  Therefore, he insisted that all cast members had the ability to get from different areas of Magic Kingdom without being noticed.

The problem was that the ground Magic Kingdom was being built upon wasn’t deep enough for tunnels to be created.  Not wanting to change his vision, Disney worked with the designers and they came up with the eventual plan of building Magic Kingdom at an elevated level, so that an extensive network of corridors – known as utilidors – could be created underneath on ground level.

To you and I, a cowboy walking through a futuristic part of the park may not seem like that much of an issue, but to Walt Disney, it was the end of the world and it just goes to show how much love the man had for creating a unique, magical experience that really was as close to perfection as it could possibly be.

6.  Disney are behind the ‘fact’ lemmings jump off cliffs 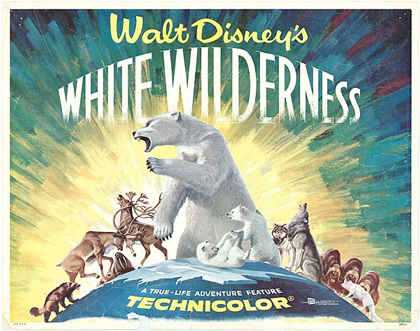 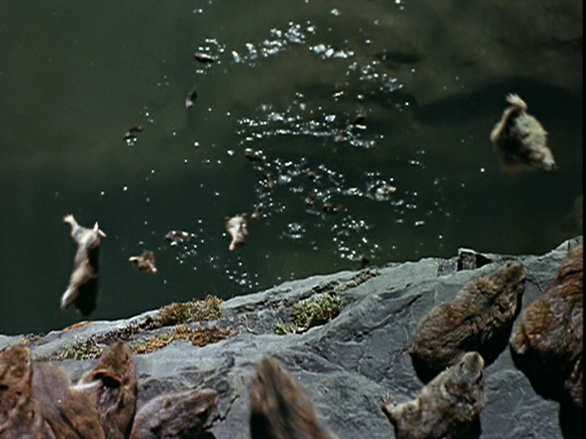 Let’s just clear something up – lemmings don’t voluntarily jump off cliffs.  Yes, I know there was a globally-adored computer game in the 1990s based on this principle and it seems to be common knowledge that lemmings are more than happy to end their lives by throwing themselves off the nearest cliff, but it’s essentially just an urban legend.

And it all comes back to a 1958 Disney film called ‘White Wilderness’.

A wildlife movie that was one of Disney’s factual documentary productions, there is one sequence that seems to show hundreds of lemmings moving around and ‘jumping’ off cliffs.  Aside from the fact only a handful of lemmings were actually used and some clever camera work made it look like there were considerably more, the impression was also given that lemmings were continually throwing themselves to their own deaths – the truth is the only time this actually occurs in the wild is if there are too many of them in one location and some get pushed – involuntarily – over the side of a ledge.

7.  Walt Disney was a racist.  Supposedly. 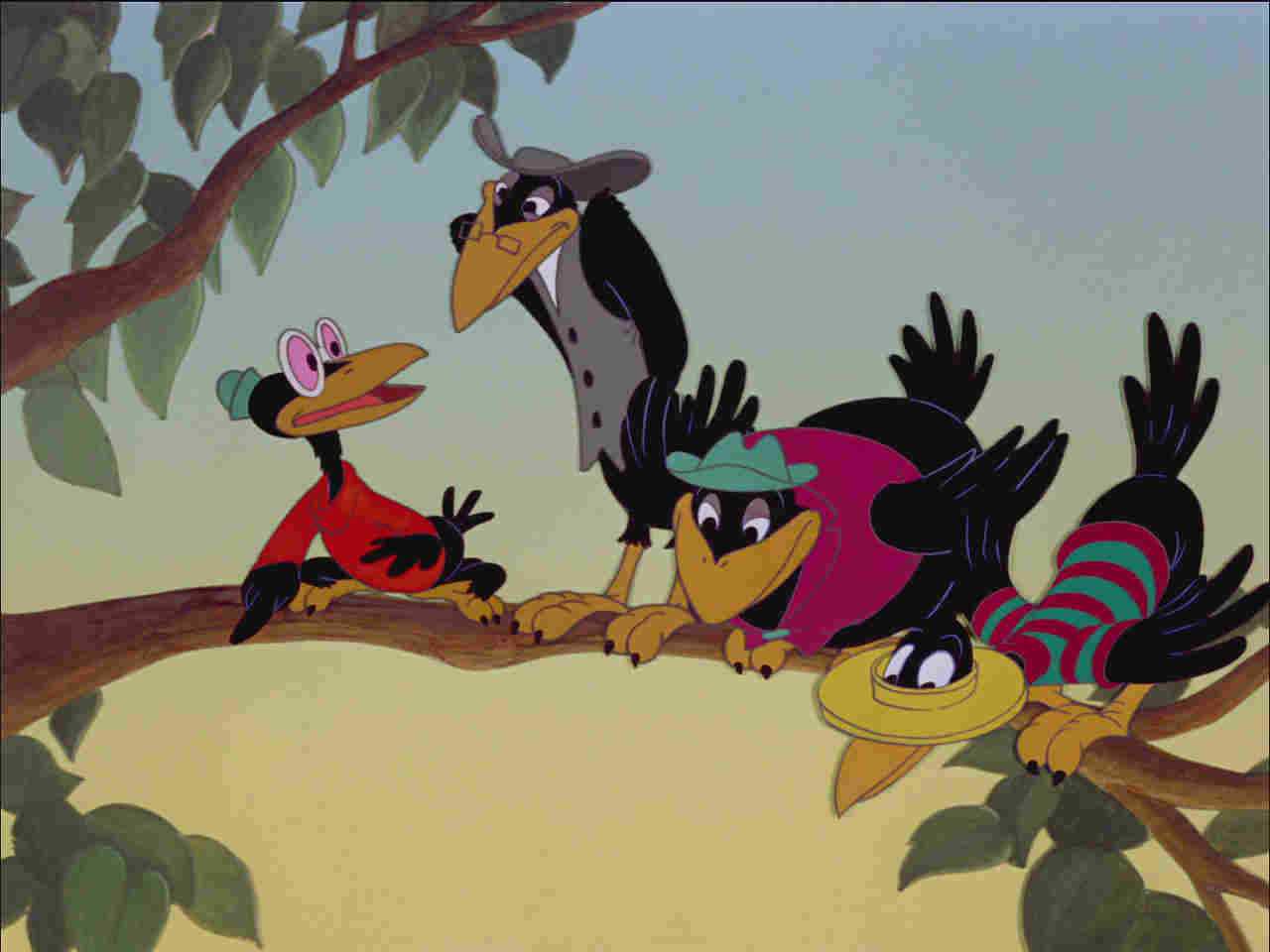 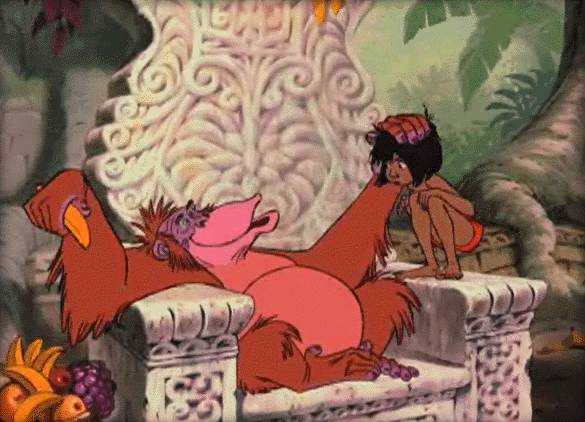 I was dubious about whether to include this ‘fact’ as I honestly thought it was an urban legend and Walt Disney had just made a few bad calls in a handful of cartoons.  However, when I looked a little deeper, things started to become a little more…concerning.

Although I don’t want to come out and say “Walt Disney was a racist – FACT!”, I do think there’s a lot of factual evidence that could suggest he was.  It’s not necessarily in an open and direct way, but some of the characters within his cartoons are more than a little stereotypical.

Take characters like the crows from 1941’s ‘Dumbo’.  There have been numerous allegations that they overly accentuate African-American stereotypes by appearing to be uneducated, poor, continually smoking and wearing ‘pimp’ hats.

Similarly, King Louie from 1967’s ‘The Jungle Book’ showcases several traits of African-American racism.  For example, aside from the fact he’s portrayed as an ape, he sings “I wanna’ be like you” to a white boy.  It can seem harmless at first, until you start to realise what else it could be suggesting.

A lot of these characters could be nothing more than a sign of the times.  When they were created, chances are they were considered normal (or at least acceptable), but as with many things, they are now considered massively racist or not politically correct.  This has happened all around the world and there are some things that you’ll struggle to believe were ever acceptable (for example, in the 1950s you could buy things, such as paint, in the colour ‘n*gger brown’.  I found that out a few years ago and it still continues to shock me).  Although it may be made worse by Walt Disney’s public image of being a model citizen who really cares for children and their futures, the extent of his ‘racism’ does appear to be quite substantial and at the very least, it makes you wonder what his views of certain races were.